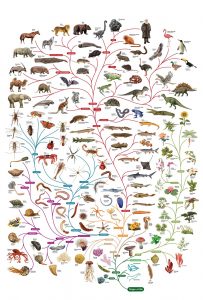 Observing how life changed from one epoch to another requires a scientific way to make sense of so much life, over so much time, what Darwin called, the “tree of life?”

Cladograms are a way to graphically represent how unique traits develop from a common ancestor, and are helpful at organizing the millions of different animals living today, as well as extinct species, including our place in it.

Consider a simple story: Isaac had two sons, Esau (hairy) and Jacob (smooth skin). Since Esau (probably like his father) had a lot of hair and Jacob didn’t, we could draw the following cladogram:

From this simple branching technique, we can see how, over time, different species can develop from earlier, more archaic ones.  Since the 12 Tribes were descendants of Jacob, not Esau, over thousands of years it became possible for the 12 Tribes to come to believe that they were separate from the Canaanites, even though both groups can claim a common ancestor, Issac.  David is often depicted with smooth skin, Goliath, hairy.

Consider a family that survived a catastrophe with two offspring. Be it the Megachirella, a squamate, who survived an apocalyptic storm that

rolled over the tropical edge of the supercontinent of Pangaea and battered the coastal islands. Rain lashed forests of horsetails and ferns, sweeping plants and animals out to sea and burying them in silt.

After the fires died down, Earth plunged into a period of cold, perhaps even a deep freeze. Earth’s two essential food chains, in the sea and on land, collapsed. About seventy-five per cent of all species went extinct. More than 99.9999 per cent of all living organisms on Earth died, and the carbon cycle
came to a halt.

Further delineations can be made by using a taxonomy hierarchy (Kids Prefer Cheese Over Fried Green Spinach, or King Philip Crossed Over For Gold and Silver):